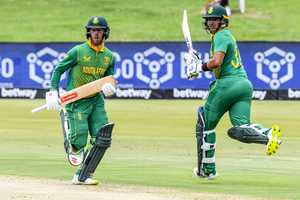 Verreynne hit 9 fours and a six, and looked good for a hundred before he holed out.

Andile Phehlukwayo blitzed 48 off 22 balls, helping add 52 runs in the last 3 overs as South Africa finished with 277/8 in the opening ODI against Netherlands in Centurion.

The base was built by Kyle Verreynne and debutant Zubayr Hamza who added 119 runs for the third wicket. The partnership came as a great relief to the hosts who were sent in to bat and lost their openers to Fred Klaassen inside 7 overs at the SuperSport Park.

Both Reeza Hendricks and Janneman Malan were outdone by Klaassen, the former outdone by a cutter and the latter by a cross-seam delivery that bounced more than anticipated. That’s when Hamza and Verreynne got together at the crease and put together a stand replete with good-looking strokes.

Verreynne hit 9 fours and a six and looked good for a hundred before he holed out in the deep to a full toss, five runs short of the century mark. Hamza, in turn, hit 5 fours and six but was out to a short ball from Brandon Glover.

David Miller and Khaya Zondo struggled after Hamza’s departure and it looked like Netherlands could contain South Africa under 250 but Phehlukwayo came in with different plans, hitting 6 sixes and a four during his short stay and taking his side to a power total.