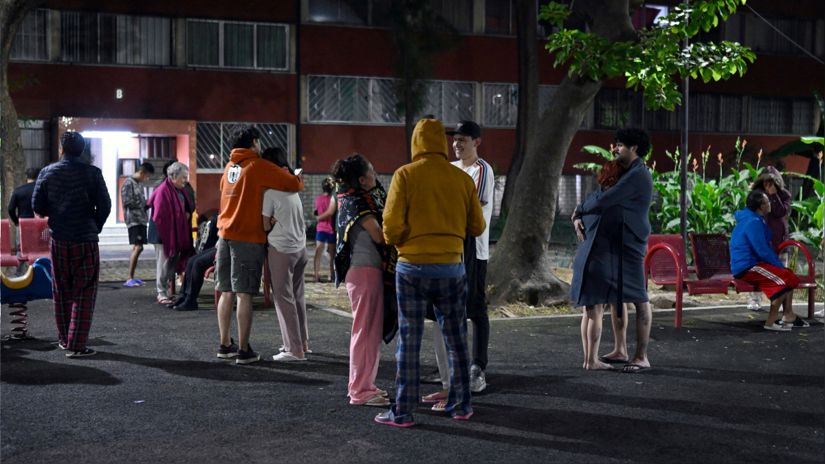 An earthquake of magnitude 6.9 was recorded in the early hours of this Thursday in Mexico, with a balance of two deaths, authorities reported, unleashing panic in the capital and other areas of the country.

It’s about the strongest aftershock of 7.7 tremor on record last Monday, with a balance of two deaths and more than 3,000 damaged buildings, according to the National Seismological Service. So far there have been 1,229 aftershocks of that event.

Two people died in Mexico City: a man with a heart attack and a woman who hit her head when she fell from the stairs of her home, after the activation of the seismic alert, the local mayor’s office reported.

With a thunderous sound, this alarm travels faster than seismic waves and warns of a telluric movement greater one minute on average before it occurs, allowing homes to be evacuated or to find a safe area.

The movement surprised the inhabitants of Mexico City when they were already asleep. Many of them ran away when they heard the alert wearing their pajamas and some carrying their dogs, which did not stop barking.

The epicenter was located 84 km from Coalcomanin the state of Michoacan (west), where the main event originated. Initially, the Seismological Service had estimated a magnitude of 6.5 for the movement on Thursday.

President Andres Manuel Lopez Obrador said the earthquake was felt in Mexico City and in the states of Michoacán, Colima, Jalisco and Guerrero, all with a Pacific coast.

“So far there is no report of damage,” said the president in a video recorded in his office while speaking with the mayor of the capital, Claudia Sheinbaum, and broadcast on Twitter.

The earthquake was felt strongly in several areas of Mexico City and its metropolitan area, located about 400 km from the epicenter and home to about 22 million people.

After the tremor, Sheinbaum reported that official helicopters were flying over the city and that there were no reports of damage.

“So far there is no damage in the city after the earthquake. I’m still pending, reporting,” Sheinbaum said on Twitter.

Last Monday, a powerful earthquake rocked Mexico less than an hour after millions of people participated in a drill, as is done every September 19, when two strong earthquakes that occurred on the same date in 1985 and 2017 are commemorated.

In 1985, a earthquake from 8.1 shook to Mexico leaving large areas of the capital in ruins. According to civil registry data, more than 10,000 people died in the megacity alone.

Experts from the National Seismological Service explained on Monday that the occurrence of these three earthquakes on the same date is the product of a “coincidence”.

Mexico registers an intense seismic activity for being in the Pacific Ring of Fire, which unites America with Asia and where most of the earthquakes in the world occur.

What to do in cases of invasion of premises? President Petro explained what the legitimate owners of these lands should do & More Latest News Here