What happens to a line in the sand when the tide comes in?

When the International Olympic Committee (IOC) awarded its 2008 Games to Beijing, it did so in spite of anxiety about the state’s repressive tendencies. The argument then was that in the spirit of partnership – and commerce – the Chinese government’s practices would steadily improve.

In the years that followed, China’s apparent openness to international investment and culture, and the willingness of its own companies to spend overseas, might have hinted at an arc towards that kind of progress. Instead, with an Olympic return to Beijing scheduled for the Winter Games of 2022, Xi Jinping’s government has taken a harder line on diplomacy and domestic policy, cracking down on pro-democracy campaigns in Hong Kong and policing foreign relations with Taiwan. Most upsetting have been the abuses of Uyghur people in Xinjiang, which several countries, including the US, have officially denoted as genocide.

Sports brands and organisations that have been selling to the Chinese population in the past decade have either been caught in the middle or tried to place themselves there. Matters continue to come to a head. This month’s censorship and disappearance of tennis star Peng Shuai, after she revealed a relationship with former vice premier Zhang Gaoli and accused him of sexual assault, has fast become a case in point.

With Peng Shuai’s whereabouts unknown and her presence airbrushed from social media sites like Weibo, on which she made her incendiary statement, the Women’s Tennis Association (WTA) stood firm. Chief executive Steve Simon issued repeated challenges to the Chinese government to provide evidence of her wellbeing, dismissing boilerplate responses and demanding that her allegations ‘be investigated fully, fairly, transparently and without censorship’. Simon signed a ten-year deal in 2018 to stage the season-ending WTA Finals in Shenzhen but, having moved this year’s edition to Guadalajara in Mexico due to Covid-19, the tour may not be going back for some time.

The statement released today by Chinese state media concerning Peng Shuai only raises my concerns as to her safety and whereabouts. Peng Shuai must be allowed to speak freely, without coercion or intimidation from any source.

The IOC, meanwhile, has treaded more softly. It mediated a video call between Peng Shuai and IOC president Thomas Bach to prove the player’s safety but the sexual assault charges went unmentioned. It all felt a little too careful for some observers.

“Frankly,” said Elaine Pearson, the Australia director for Human Rights Watch, “it is shameful to see the IOC participating in this Chinese government’s charade that everything is fine and normal for Peng Shuai.”

The episode has only heightened speculation that nations including the US will pursue a diplomatic boycott of Beijing 2022, allowing athletes to compete but not sending any state officials. Some commentators warn such a move would be counterproductive and that the absence of those representatives could put athletes in danger – an argument that does little to improve confidence in the wider state of affairs.

If the Biden administration does skip Beijing, a tit-for-tat retaliation for LA 2028 would not be impossible. The back-to-back boycotts of Moscow 1980 and LA 1984, which the IOC has spent a generation trying to avoid, loom again in the imagination.

Beijing 2022 will bookend a politically exacting 12 months. This time next November the Qatar 2022 Fifa World Cup will be well underway, with soccer fans adjusting to the tournament’s unprecedented presence at the end of the calendar year. Right now, that adjustment is one of the less discomfiting aspects of the conversation around the event.

When soccer’s world governing body awarded the tournament to its smallest ever host in contentious circumstances almost exactly 11 years ago, it would have hoped by now that the mood would be one of celebration at a first World Cup in the Middle East. Instead, many recent headlines would be among the more pessimistic of those projected back in 2010.

This week, journalists Halvor Ekeland and Lokman Ghorbani from Norwegian state television channel NRK were arrested and held for 30 hours by the Qatari authorities, apparently for trespassing on private property and filming without permits. The pair had been reporting on working conditions at World Cup venue construction sites and were due to meet Abdullah Ibhais, a former Qatar 2022 communications director turned whistleblower who is appealing against a five-year prison sentence for corruption. Ibhais was himself arrested shortly before the interview was set to take place.

The Norwegian government issued a strong reaction with Jonas Gahr Stoere, the prime minister, tweeting: ‘The arrest of NRK’s journalists in Qatar is unacceptable. A free press is crucial to a functioning democracy.’

Ekeland and Ghorbani’s presence in the country comes with Qatar under continued scrutiny over the treatment of its two million migrant workers. This is despite the passage of legislation in 2020 that was meant to effectively end the ‘kafala’ system that prevented those workers from changing jobs or leaving the country without employer consent. 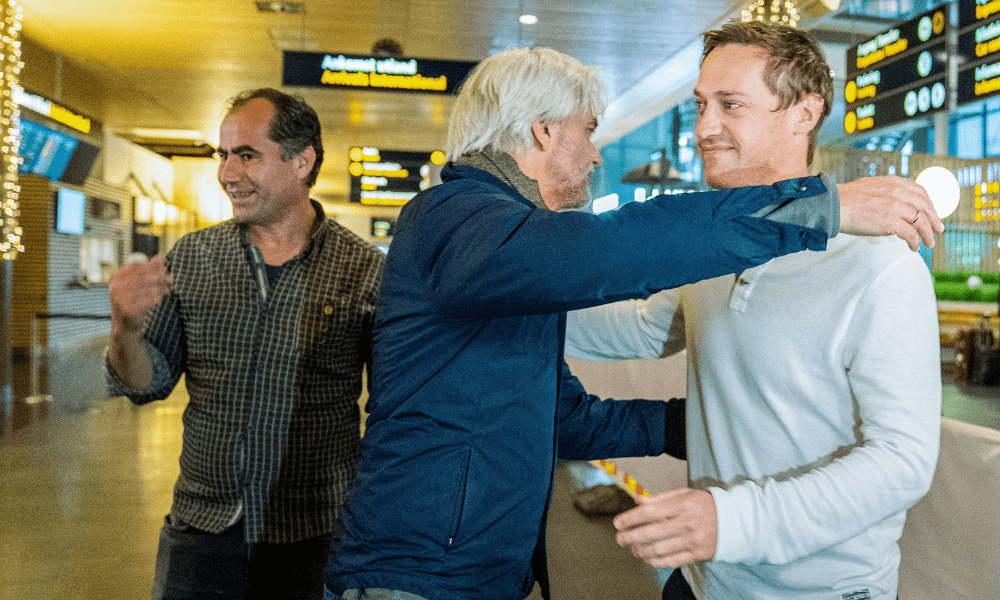 Journalists Halvor Ekeland (right) and Lokman Ghorbani (left) are welcomed by head of NRK sports Egil Sundvor after returning to Norway from Qatar, where they were arrested

Earlier in November, Amnesty International issued a 48-page report entitled Reality Check 2021, in which it accused the Qatari government of ‘complacency’ in applying its new laws and alleged that the worst transgressions had resurfaced. In August, another Amnesty report had accused Qatar of failing to properly investigate the deaths of migrant workers, including on World Cup building sites. Over 6,500 are believed to have died in Qatar since 2010.

Now, there are signs of some organisations and individuals breaking ranks on these issues. The Danish Football Union (DBU) has said it will not participate in commercial activities arranged by the World Cup organisers and promises to be scrupulous in its choice of hotels and training facilities next year. It has also said it will intensify its messaging in support of human rights, with players set to wear slogans on their training kits during the competition.

When Formula One world champion Lewis Hamilton stepped up the defence of his title with victory at the first ever Qatari Grand Prix on Sunday 21st November, he did so wearing a helmet decked out in the rainbow colours of the Pride flag. He was showing solidarity with the LGBTQ+ community – homosexuality is illegal in Qatar. Before the race, he acknowledged that Qatar’s reputation for human rights abuses was “one of the worst in this part of the world”.

“These places need scrutiny,” he added. The next stop on the Formula One circuit is a debut race in Jeddah, Saudi Arabia.

One way or another, decades of established sports industry thinking are under threat. There is recent precedent in events overseen by controversial regimes collapsing – the withdrawal of the 2021 IIHF World Ice Hockey Championships from Belarus, under extreme sponsor pressure, is one example. But the stakes that lie ahead are even greater.

In response to those boycotts in the 1980s, not to mention the possibilities of a globalising post-Cold War economy, leading sports federations, brands and leagues bought into a new vision of what Olympism and sport could be. The image that was sold was not so much apolitical as intrinsically optimistic. It had as its founding principle the notion that competition offered a safe space for humanity to flourish.

Sport, and its mega-events in particular, would be a place where athletes and fans could not just enjoy themselves but learn, share ideas and cultural experiences, improve their environment and be improved by it with honest work and open minds. This might have been a rhetorical flourish but it was grounded in familiar ideals. And it was effective, creating the distance between politics and people that allowed business to happen.

For as long as that held, it has never looked more vulnerable. There is a point where optimism becomes naivete, or where the benefit of the doubt becomes an indulgence, or where neutrality starts looking like cynicism. Not everyone will agree where that is.

Most people will be familiar with the analogy about the frog in a pot. It is based on the supposition that a frog will leap straight from a pan of hot liquid but if you put one in tepid water and incrementally bump up the temperature, it will be unwittingly boiled alive.

The science, ironically, now holds that theory to be bogus. The metaphor endures, nonetheless. Yet if it feels apt in this context, here is the question: which is the sports industry in this scenario? Is it the frog, overwhelmed by events outside its control? Or is it manning the stove, gently turning up the heat to see what its principles can stand?

Perhaps there is no single answer. Either way, that water is starting to bubble.